Growing up, my mom made nearly everything from scratch; if she didn’t, she certainly could.  Chicken stock.  Cheese soup.  Gorgeous cakes before the age of Pinterest.   Egg rolls.  Yup, I said egg rolls.  She made lasagne that was to die for.  I grew up knowing you could make nearly anything yourself and she took great pride in that.

Yogurt however, was not something I ever knew you could make at home.  Not until I was 17 and working at a Lebanese restaurant did I have my first exposure to “homemade” yogurt, called lubin,  which was a base for their house dressing as well as a side for stuffed grape leaves.  I remember watching the cook in awe as she heated the milk, and then added yogurt, and like magic, the next day, there was new lubin!

I didn’t understand the science of it until much later.  Yogurt is a fermented food.  Chances are you have had other fermented foods, even if you don’t know it.  Sauerkraut, kimchi, sourdough bread, beer and Kombucha are all fermented foods.  At its most basic level, fermentation is the process of using bacteria and other microorganisms to alter the state of your food.  In yogurt, “good bacteria,” are added to milk heated to a specific temperature, which allows the bacteria to flourish and digest the milk, altering its chemical structure, and make wonderful yogurt.

Ready to give it a try?  I promise it’s worth it.  In addition to being super simple, making your own yogurt is economical (this recipe calls for a little less than half a gallon and you end up with about a quart.)  You also eliminate any potential additives, and have a myriad of sweetening choices and flavor additions when you start with a blank canvas.  Plus, when you make it at home, you know its gluten-free! 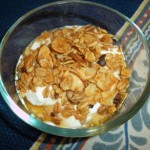 Make sure your starter yogurt isn't expired. Yogurt cultures can live a while (withing a week of making it is ideal) in your fridge, but not indefinitely.  When in doubt, buy a fresh one.  If you have one of the fancy yogurt starter packets, you can use these in the same way and at the same time during cooking, just sprinkle them into your cooled milk.

Should you want to make sweetened yogurt (or vanilla), you can add about 1/2 c. honey or maple syrup after it comes to 185 degrees.  Just whisk it in before returning the lid.  If you want vanilla yogurt, add a TBSP of vanilla  extract with your sweetener.  You can still keep a starter for next time, but you will have a sweetened starter, so you will have to sweeten any subsequent batches made from that starter.

Why 185 and 120?  Bringing the milk to 185 degrees breaks down proteins to help the microorganisms digest them and reproduce. You add the milk at 120 so that the heat doesn't kill any good bacteria.